Loud noises can produce both temporary and permanent hearing loss. This article describes what types of sound constitute a hazard and what you can do to mitigate the hearing damage if you are accidentally exposed to a loud noise.

The hair cells and nerves in the cochlea and the organ of Corti in the ear constantly use energy to convert sound waves to nerve impulses and transmit these nerve impulses to the brain. Excessively loud sound causes metabolic exhaustion, in which the glycogen reservoirs that the cells use for energy and the oxygen that the cells need for respiration are depleted. Metabolic exhaustion also produces free radicals and reactive oxygen species, which can further injure the proteins and other molecules in the cell. Cellular overstimulation causes a type of temporary, reversible damage known as a ``temporary threshold shift'' as the cells stop functioning normally. Over the next 16-48 hours, the cells will generally recover if conditions are right and the damage is not too severe. If the cells cannot recover, the damage is permanent and the cells will die, producing a permanent threshold shift.

The hair cells are particularly dependent on oxygen. There is a considerable literature on aerobic exercise increasing the danger from loud noise (such as exercise music), perhaps by depleting the oxygen supply to the cochlea.

Noise-induced hearing loss is typically greatest in the range of 1-4 kHz, which is the range of fricatives such as /f/, /v/, /θ/, /ð/, /ʃ/, /ʒ/, and /h/.* The higher harmonics of sounds made by the human voice and the lower range of sibilant fricatives such as /s/ are also lost, while low sounds and the very highest pitched /s/ sounds are relatively normal. If you had noise-induced hearing loss, voices would sound muffled and it would sound as if your ears were stuffed with cotton, yet at the same time, the highest-pitched sounds near the upper limit of your hearing would sound normal or even enhanced. Although tinnitus, or ringing or rushing sounds in the ears, often accompanies hearing damage, hearing damage is not necessarily accompanied by either tinnitus or ear pain. The painless nature of hearing loss is what makes this affliction so insidious.

Any sound over 80 to 85 decibels (dB) will eventually cause hearing damage. The sound level is measured on the A scale, which was designed to mimic the response of the human ear. Noise of 85 dB (the level of loud rush-hour traffic) causes damage after only 8 hours. Motorcycles and firecrackers emit sound from 120 to 140 dB. Firearms can emit sounds up to 190 dB. The decibel level varies according to the type of noise generator and the distance between the source and your ear. The maximum permissible exposure time for continuous time-weighted average noise, according to NIOSH and the CDC (2002) is given by the table below. A rule of thumb is that for every 3 dB increase in sound (a 2-fold increase in energy) over 85dB, the permissible exposure time before possible damage can occur is cut in half. This is sometimes referred to as a ``3 dB exchange rate''.

The original exposure standard was set by the Committee on Hearing, Bioacoustics, and Biomechanics (CHABA) for the National Academy of Sciences/National Research Council back in 1975. The ISO-1999 model (from 1990) defined the "equal energy" hypothesis, which states that a given amount of acoustic energy would cause the same hearing damage, whether it was over 8 hours or all at once. According to OSHA [46 Fed. Reg. 4078 (1981)], a person is considered to have a hearing impairment when the hearing threshold loss exceeds 25 dB at 1, 2, and 3 kHz.

The generally accepted ceiling limit for noise, recommended by NIOSH and based on the results of Kryter et al. [8] is 140 dB peak sound pressure level (SPL). The US military has also done considerable research into the risks of impulsive noise, such as that from firearms.

Ultrasonic frequencies (sounds above the range of human hearing) can also damage hearing due to the generation of subharmonics. Most experts recommend a limit of 110 dB for sound at 25 kHz [5,6]. The non-linear interaction of ultrasound with matter (such as when the energy is scattered at an air-water interface, or in the ear itself) creates subharmonics that fall within the range of human hearing. These subharmonics are perceived as squeaking sounds. Earmuffs are more effective at blocking ultrasound than low-frequency sound. Diagnostic ultrasounds for pregnancy do not pose a hearing risk.

Many people don't realize that sounds produced by common musical instruments, such as the acoustic piano, violin, and flute, can produce severe hearing damage. A visit to any piano store without your earplugs will confirm that many pianists have unknowingly lost much of their hearing. Even former President Bill Clinton suffered a hearing loss. This was not caused by Hillary as you might think, but from practicing on his saxophone. All musicians should routinely check their sound exposure levels with a sound level meter. The sound level meter sold by Radio Shack is very highly regarded, and is considered to be one of the better products Radio Shack ever produced**. Malfunctioning automobiles are another potential source of hearing injury. If your car makes a loud grinding noise, the noise alone may be sufficient to make it unsafe to drive.

Moreover, recent research has shown that temporary noise-induced hearing loss can cause delayed degeneration of the cochlear nerve. This means that even if a person recovers from hearing trauma, there is still nerve injury that can eventually produce permanent hearing loss [7].

Impulsive noise from firecrackers, explosions, or crashing machinery produces a similar progressive effect, with temporary threshold shift being the most common effect from brief (<0.1 sec) exposures. However, very loud impulsive noise can produce permanent hearing loss with a single exposure. 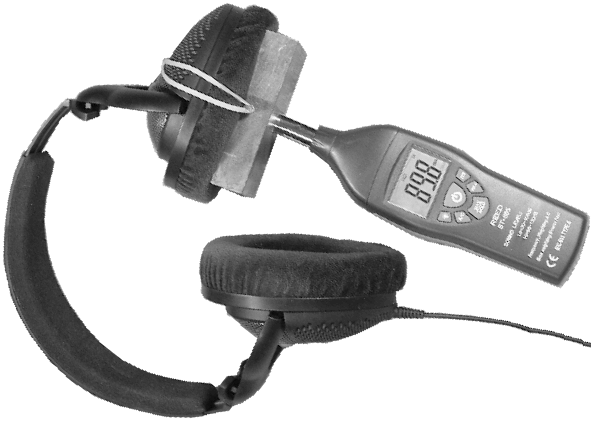 Measuring potential sound exposure levels in headphones. The sound level meter's probe is inserted through a hole drilled in a piece of wood or similar material to create an enclosed space similar to that between the headphones and your ears. Measuring the sound level in an enclosed space is important because reflections between the headphones and the head can intensify the sound by several decibels.

Mitigating the damage to your hearing

Hearing damage not only interferes with communication--it can also cause tinnitus, or ringing in the ears. Tinnitus is very annoying and can last for years, and it can interfere with the enjoyment of music. (It is especially bad for musicians; just imagine trying to play a violin with someone blasting a note two octaves above high C into your left ear.)

Of course, prevention is the best way to avoid noise-induced hearing damage. Sound-absorbing earmuffs or earplugs should always be worn in the vicinity of firearms or loud machinery, and whenever rock musicians are near a potential sound-producing object. Ear protection should also be worn when using seemingly harmless items like lawnmowers, some vacuum cleaners (such as shop vacs), and aluminum extension ladders. Sound intensity falls off with the square of the distance, so moving even a little further away from the source will greatly reduce your exposure.

Special earmuffs are available that contain special noise-limiting amplifiers that block all sounds louder than 85 decibels, but amplify fainter sounds like voices so they can be clearly heard. Another solution is disposable earplugs, which fit inside the ear. They automatically expand in the ear canal and can reduce noise by up to 48 dB.

If you're exposed to loud noise, there are a few things you can do to minimize the damage to your hearing: