Silence of the Lamps:

Tubular fluorescent lamps with electronic ballasts are very popular because of their instant-on characteristics, low audible hum, and compact size. However, many such lamps produce unacceptable amounts of radio frequency interference (RFI). This RFI appears at 30-40 kHz intervals up to about 500 kHz. I purchased one of these lamps, and after being disappointed in the amount of noise it produced, I did some tests using a F13T5 bulb with different ballasts and wiring strategies in order to find the best way to reduce its radio frequency interference. Below are some tips that I discovered for reducing RFI from these lamps.

If the lamp is wired and grounded properly, the amount of RFI is only slightly higher than that produced by a regular compact fluorescent (CF) lamp. A properly wired lamp with fluorescent ballast should not produce any detectable buzzing more than 10 feet away on any frequency (at least above 150 kHz, which was the lowest frequency I tested). On the other hand, if wired improperly, buzzing can be heard on a wide range of frequencies, including the MW region as high as 1000 kHz, and will easily interfere with radio reception 50 feet or farther away. If you use one of these lamps, aliens from outer space will visit you and complain about interference in their flying saucers.

This is the lamp used in the tests. The original fixture was all metal resembling stainless steel, except for the base. The original base was a hollow, cross-shaped piece of cheap plastic with a fake metal coating. Inside the plastic base was an unencased electronic ballast. This design resulted in large amounts of RFI. The lightweight plastic base also made the lamp very unstable. These lamps, which were sold in hardware stores, were only on the market for a short time. I replaced the plastic base with a 8×8×3/8" steel plate and mounted a new ballast, enclosed in a steel case, on the back. The wires travel under the steel plate (which is on rubber feet) and up through the tubing. This design provides a much sturdier support than the original base and greatly reduces the RFI.

If you rewire a lamp, be sure to use fixture wire, which has insulation that can handle the higher temperatures, and not regular hook-up wire. Always follow the electrical code when wiring lamps. Check for induced potentials and shorts with a voltmeter before using the lamp. Make sure the ballast is rated for the specific bulb you're using. People have been electrocuted by using the wrong fluorescent bulbs (the ballast can overheat and melt the insulation).

From the figure below, it is evident that different types of electronic ballasts have markedly different RF spectra. These lamps were measured with a low-gain antenna one foot away from the ballast, and the computer monitor turned off. There is a certain amount of ambient noise that I didn't bother to try to eliminate.

Lutron dimming fluorescent ballasts emit their energy in a sharp band with harmonics extending above 500 kHz into the AM radio band. The Tu-Wire was the worst, with peaks up to -70 dB in my setup. When the lamp is dimmed, a small amount of broadband noise is also evident between the major peaks. Non-dimming ballasts, such as the ballast in the GE F21T5 fixture shown here, tend to have broader bands, with markedly reduced intensity above the third harmonic. The sixth harmonic (around 320 kHz) is already down to -120 decibels. This indicates that the ballast in this lamp has a relatively low THD.

Fluorescents with magnetic ballasts also produce small amounts of radio frequency interference over a very broad spectrum, but the levels are very low compared to electronic ballasts (the y axis in the figure is in decibels, which is a logarithmic scale). Light dimmers also produce broadband interference. The light dimmer in this case was farther away, about ten feet from the antenna. 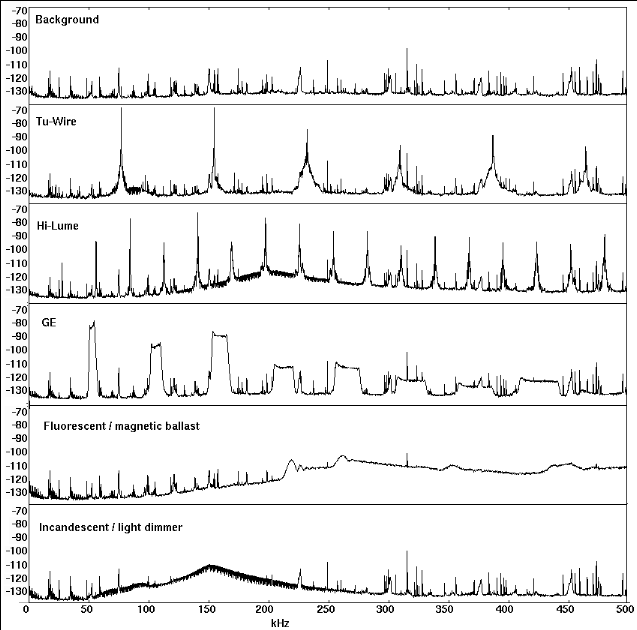 I recently came across another one of these lamps. They are back! They are now using a different ballast that produces much less radio interference than before. The inside of the plastic base also has a conductive metallic coating, presumably to reduce RFI, but the lamp itself is not grounded. Unfortunately, on the lamp I tested, when the lamp was turned on, all the metal parts were about 90 volts AC with respect to the ground. It's easy to feel this voltage with your hand when adjusting the lamp. Using a multimeter on its 20 amp setting, I also found a measurable amount of current. There were no shorts in the lamp. Most likely it is only induced RF from the new ballast. But there's an awful lot of it, and I would be hesitant to use this lamp in an area where there are grounded objects, like water pipes or radiators. If you use this lamp, I recommend replacing the plug with a three-conductor plug to drain it off. Back